The Mind Diet is a mixture of two diets. 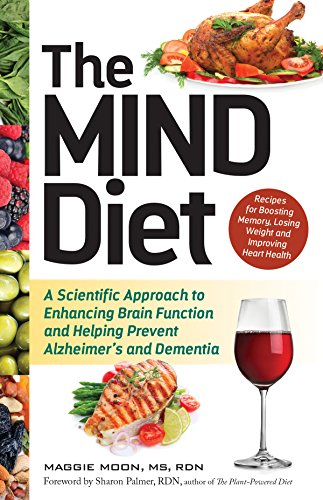 It uses the teachings from the DASH diet along with the Mediterranean diet to create a way of eating that can benefit the brain. The acronym means Mediterranean-DASH Intervention for Neurodegenerative Delay.

It was created by a health professional in the field of nutrition when a study was done on the effects of aging and the brain in relation to certain nutritional foods. The study showed that when study volunteers stayed on the MIND diet, their risk of developing cognitive diseases such as Alzheimer’s was lessened by more than fifty percent.

According to the study, participants who didn’t fully follow the MIND diet and only followed part of it, still lowered their risk of getting Alzheimer’s. The findings of the diet study were backed up by prior studies that showed that people who consumed leafy green vegetables had less risk of cognitive problems developing.

The diet is not only good for helping to slow cognitive decline and improve memory, but it’s also good at helping to lower blood pressure numbers and also lower glucose levels.

Following the diet is also good for the health of your heart.

How the diet works is a matter of focusing on eating foods that are known to promote good health – not just for the brain but for the entire body. The concept is one that’s easy to follow, so most dieters find this way of eating less complicated that some healthy eating plans.

You have a list of ten foods to choose from. You’ll load up on vegetables from one group and you’ll need to eat a vegetable as part of one meal at least once a day. Choose plenty of leafy green vegetables like spinach and consume these foods at least six servings per week.

You’ll need to eat something from the nut group for five servings within a week. For the fruit group, you especially want to focus on berries such as blueberries since they can reduce the effects of aging on the brain along with the conditions that often go along with aging such as dementia.

You’ll focus on eating something from the bean group three times a week and whole grains at least three times a day. You’ll want to have fish once a week while using poultry as your meat source twice a week.

The diet calls for the use of olive oil in cooking because the extra virgin form of this oil is known to reduce brain degeneration, protect memory and lowers the risk of plaques that are a mark of Alzheimer’s.

The diet also has followers drink a glass of wine every day. There are five foods that you do have to limit your consumption of – these are butter/margarine, red meat, cheeses, sweets and fried or fast food.

A way to have success with this diet is to get some of the helpful tools that go with it. You can get a MIND cookbook and you may find it helpful to get a diet journal to track your weight loss progress.

The Mind Diet is Available on Amazon Now

The Power of Stretching Helps Us Avoid Injury

Benefits of Chair Yoga for Seniors

An Introduction and Overview of Capoeira

3 Self-Defense Moves Every Woman MUST Know

Women Drivers How to Stay Safe in Your Vehicle

6 Tips For Choosing The Right Self-Defense Classes for Women

Sheep No More: The Art of Awareness and Attack Survival